Between the atmospheric Siurana and the mysticism of the Montsant

There are many climbers who arrive in our lands attracted solely by the magic of our rocks. Maybe, we’re not conscious of it, but clearly we live in an area with great renown in the international climbing world. Siurana and Montsant, Montsant and Siurana, two very powerful names. These are destinations that capture you and leave an indelible mark. It´s strange to walk the streets of Cornudella without seeing at least one climber in the street, re supplying in the local shops or having a coffee in one of the many local bars. The majority of climbers, wherever they are from, who come here, return. Some even return to live.

This is what happened with Rai and Magi, two climbing fanatics from Vilafranca rooted in Cornudella for more than 3 years now.

MN: Explain how you started in the climbing world, when you started, where, etc.
MAGI:I started about 10 years ago, at first I didn’t want to go climbing, I was a party animal, but some friends tricked me into going and since then, I haven’t stopped. The truth is I can’t remember how it went, all I know is that it completely changed me, once I started, I couldn’t stop.
RAI:With me it was about 4 years ago, I was on the edge of the climbing world for 2 years before that, but 4 years climbing. At first, I remember arriving at the foot of a climb and asking “What’s the prize for reaching the top?”, truth is, we both dropped hockey, to take up climbing. We were both pretty good ice hockey players, in important leagues, and we dropped it to start climbing, which gave us a much bigger buzz.

MN:What does climbing mean to you?
RAI:It’s our hobby, but also a way of life. The world of climbing is like a family, we all move in the same atmosphere. When you go into a bar, you can spot the climbers, the hikers, the runners etc, we’re all linked in one way or another to the mountain, very quickly you can spot who is in the family and who isn’t.
MAGI:For me, climbing is everything. Everything I do is related to climbing, I gave up work to go climbing, I bought a camper van so I could travel and climb and at the moment I’m developing a Rocodrome (climbing centre) in Tarragona which will be called Can Fanátik.

MN:Are you traditional (rope) climbers, or do you prefer bouldering?
RAI:I do everything, the best for me is to alternate, if you alternate, you advance and the more you advance the better you feel and the stronger you feel.
MAGI:In my case, I have to say that I am more traditional. But a complete climber can do it all.

MN:Why Can Fanátik in Tarragona?
MAGI:In Tarragona there is a larger market than here, many more people. It’s a city, and apart from that, there isn’t another Rocodrome there. My idea is to make some money and continue living, but I’ll continue living here, you’ll never drag me away from here!!, truth is, when I moved here to Cornudella I said “here I am and her I will stay until I die!”.

MN:At the moment, do you climb every day ? What is your daily routine?
MAGI:At the moment I can’t, because I’m working, I’m setting up the Rocodrome, but I’ve spent the last four years of my life doing nothing but climbing.
RAI:This last year I’ve taken a sabbatical, but we’ve both had a year that we’ve climbed every single day.

MN:How and when did you arrive in Cornudella?
RAI:One day we were having a beer and said “Shall we go or not?, Where shall we go?” Magi said “I want to go to Siurana” so I said “I’ll go with you!” truth is, we pulled each other along, we’re both very sociable and we adapted very quickly.
MAGI:For about a year I was going round in circles with the camper looking for a place to stop and finally decided that Siurana is a place relatively close to Vilafranca, its always better to be fairly close to the family, just in case. It’s a place with services, Reus is close, there is a medical centre, a petrol station, shops etc. At that moment Rai lost his gig and proposed coming and living here. He’d been working the same job for 8 years and his apartment was expensive and he couldn’t afford it, We both needed a year out, and this was the ideal time to do it!!

MN: Why here and not somewhere else? What does Cornudella have that you can’t find in Santa Linya, Lleida, Montserrat or Rodellar for example?
MAGI: First of all you have a lot of variety in the same place, in Rodellar you only find tufas and caves, here you have it all, the Siurana walls, the holes of the Montsant, long routes, short routes, bouldering, overhangs, plus we have Arboli and Margalef close by, Lleida just an hour away and others, at first I thought of living in Margalef, but that place is the arsehole of the world! Cornudella is bigger than the other villages of the area. Mind you, living in Margalef would be a unique experience!!
RAI: Cornudella is the second capital of the Priorat, apart from the services we have in the village, the Mountain is here! You’re just in the middle of paradise! And you can climb here all year around. You have to consider that in other areas you can only climb at certain times of the year, here it’s the whole year round, fantastic!
MAGI: Yes, we have the paradise of climbing on our doorstep, for everything, the quality of the routes, the rock, the climate the number of zones, the mountain. Not many places in Europe can match here. The people that come, either come back, or stay. Lots of different styles and everything close to one another.

MN: From all of the zones around us, which is the one you like the most and why?
MAGI: El Racó de Missa, without doubt, for everything, the quality of the climbs, the scenery, it is spectacular. If you only have one day and can only visit one zone, I would recommend el Racó de Missa. Above all for the sea of clouds, the first time I climbed here we had a sea of clouds, it was brutal. El Racó de Missa is THE zone, ok, you have to walk a bit to get here and some people don’t like to walk with all of their gear. But in any case, if you like climbing, Siurana is superb, and Margalef, goes without saying. Every place has its particular charm.
RAI: I agree with Magi, El Racó is magic and has spectacular views, Siurana is very pretty aswell, but El Racó is particularly special. In Siurana you have everything very close, almost hidden, you don’t have the panorama of El Racó, here you have long high climbs, from where you can see la Mola and the sea, apart from that, you have everything from the lowest to the highest grade, well, the highest no, but a strong climber will enjoy everything and even a weaker climber will find a lot in this area. 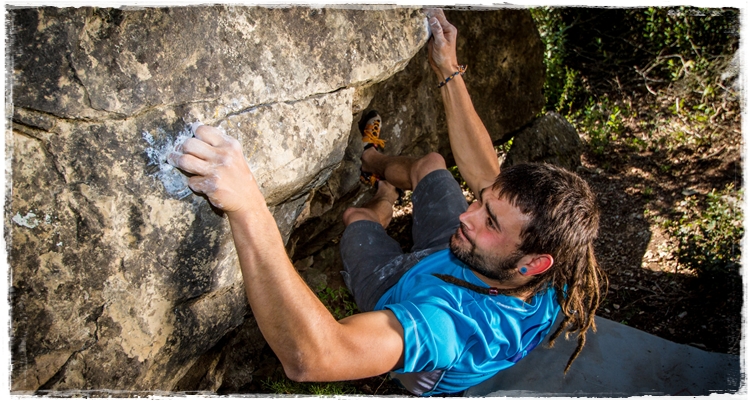 MN: Define Siurana and Montsant in one word. What are the principal differences between the two places?
MAGI y RAI: For us, Siurana is more social and Montsant is mystical. If we had to define them with just one word, we could say that Montsant is tranquil and Siurana is atmospheric. Montsant has the walking, open spaces, great views etc, it’s a fanatical place, there are fewer people, a lot of the time you can climb, just you, your buddy and your rope. In Siurana that’s impossible. There are always people. If you take notice, you’ll always find that at easter, the locals always end up climbing the Montsant, quite simply because there are fewer people and the zones are more scattered, El Racó is one of the best known but there are other equally stunning areas, La Escletxca, Barrots, La Roca de les Hores, el Camell and Sant Joan del Codolar. La Roca de les Hores is a great place to go in summer. It’s like, in the Montsant, you can always find great palces to go in the summer, cool corners with shade etc., Siurana, on the other hand is more famous, the ultra hard climbs that you see in the magazines are all in Siurana, and of course, all the tourists want to go there!! In Siurana you always know who is climbing where from the cars that are parked in each sector!

MN: What do we need to do to make us a benchmark in the world of climbing? What lets us down? What can we improve?
RAI: There seems to be little respect for the environment, lots of rubbish, buts that’s not just a local problem, it’s the whole country. The crowds may also become a problem. What worries me most is that the natural environment is not capable of absorbing the volume of people. This is something that can only be avoided through education and respect for the mountain.
MAGI: I think that the problem of rubbish is Cataluña in general, I’ve travelled a lot and seen places where this is not an issue. Away from here the mountain is cleaner, there is more respect. I think we had it before, but now we’ve lost it. Before, nobody threw paper on the ground, now you find cigarette butts, toilet paper, tuna cans, I even found a rolled up ball of adhesive bandage one day! I don’t know, between us all, we need to solve this problem, maybe they could put rubbish bins in certain sectors, look at how it could be financed, I don’t know. I think we need a campaign about this, if you find an area clean, you keep it clean, if it’s dirty, well, who cares!
RAI: But we’re not saying that it’s just the climbers that make it dirty. Today there are many people that come to the mountains, it’s the fashion. The local tourists that come to Siurana for example, also leave their rubbish, and lots of it! It’s not just the new climbers, those that are used to the gym or rocodrome, those who have little mountain culture and little contact with nature.
MAGI: I think I mentioned that I am creating a rocodrome in Tarragona, Can Fanatik, well, this project we are pushing from an entity we created … The Association of Mountain Sports and Climbing of Tarragona, with this organization we would like to do many things, such as organizing an activity to end the rubbish! An excursion to the mountains to clean them up. Next week I’m going to speak to the mayor of Margalef, we’ll have a day of cleaning, a marquee from which to explain the issues, we’ll give out bin bags and gloves to everyone, and when they come back from climbing, bring the bag back full. We’ll recycle the rubbish. We’re a new organization, and very motivated. 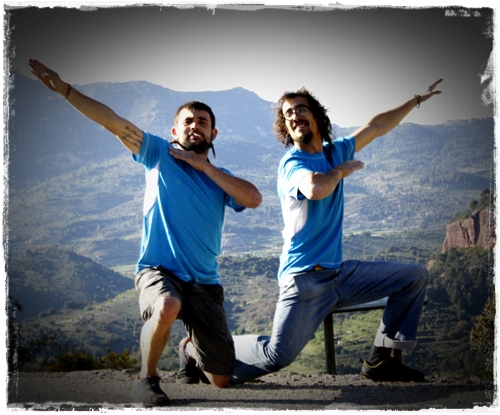 MN: We like that idea Magi, Count on Montsant Natura to give you the support you need. Thank you to both of you for giving up some of your time time to talk with us, above all, health and fanaticism!